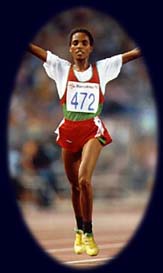 Derartu Tulu rose to fame and an Olympics history, when she convincingly won the women’s 10000 meters race in the Barcelona Olympics in 1992. The scene of this 23 year old Ethiopian young lady winning this race and then draping herself with the national tri-color and doing a lap has placed her in the ranks of the eternal Ethiopian heroes Abebe Bikila, Mamo Wolde and Miruts Yifter.

Dearatu was born in 1969 in the village of Bokoji in the Arsi region of central Ethiopia as a seventh child in a family of 10 children. Even in elementary school, Derartu excelled in horse riding competitions. Derartu’s first significant win came in a 400 meter race in her school where she out-run the school’s start male athlete. That along with a win in 800 meters race in her district convincingly put Derartu in a path of a successful career in Athletics. In 1988, Derartu represented the region of Arsi and competed in a national 1500 meters race where she won a bronze medal.

When she was 17, Derartu was hired by the Ethiopian Police Force. In 1989, she competed in her first international race of 6 kilometer cross-country in Norway but was 23rd. In a years time, though, she competed in the same race and won the Gold Medal. Derartu won international recognition and success in the 90’s. Her record-setting win in the 10,000 meter race in Bulgaria and her win in the same distance race in Cairo, Egypt are worth mentioning.

Derartu’s win in the 10,000 meter race in the Barcelona Olympics goes down in the History Books as the first gold-medal win ever by an African woman. Derartu is still winning races and bringing, the gold, silver and bronze medals to her people and country. In her short but on-going career, she has managed to win 35 gold, 12 silver and 15 bronze medals.

| (back to Ethiopia Athletes Home-Page   |